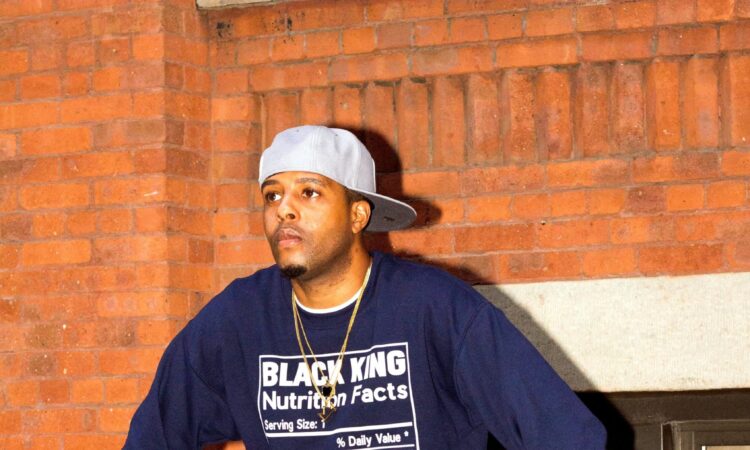 Introducing Amari Mar an Independent rap artist from Brooklyn, NY.  With musical influences range from Michael Jackson,Stevie Wonder to Nas,Rakim Wu Tang and many more. His taste in music is pretty eclectic to say the least.

Grand Rising…, the sensational new album from Amari Mar, and as you know with every album the key is to spend a few days getting into each track to truly feel the nuances, lyrics,  music, wordplay, and quality of work that it takes to deliver. A “Grand Rising” does not let us down as we delve to the first track… we skip this to track number 11 on the album  ‘King Sh!t’ as i am attracted by the Royal vibe the title encompasses. The song introduces the artist into the arena with the heavyweight blow, like a fighter into the ring. The song celebrates the distinction between what you are about to hear and any other artists that you might be used to. Amari sets the royalty bar with this one with lyrics and production working seamlessly to guarantee a smooth entree….I decide to go back to the start and continue with the second song which is ‘Holy Sh!t’ and right from the bat as Amari breathes out the first word ‘Holy Sh!t’  you are quickly hit with a lyrical brick which only compared to the first time i heard Jay-z’s “99 Problems”. The beat musically assaults you to play your position and listen in attention to the lyrics of a great spitter who not only is a wordsmith but is one who is capable to ignite the vibes alive..   In “Nothing to Prove” – quirky, unusual the soundscape is beautiful… well i am using his own words to describe the entire song which hits hard. With all the mumble rap that have drifted through to Europe during recent years. It is great to witness the fitness of an artist that keeps it real and takes it back to the true sounds of New York. Only a Brooklyn rapper can make sense and bring back the quality needed to elevate the genre.

“Black Business” , rocks and rolls with a heartfelt swing and offers a warm embrace in the midst of total darkness. The single sees Amari get deep showing and educating through music. “Just the other day i spoke to JS and we are going to put our money in property”. Amari shouting “Black is back in business” with this classic song. This track can literally make you want to start an empire. HipHop that produces edutainment is what this song creates. An amazing track, and you are whack if you don’t understand how important promoting Black businesses is in this day and age. The history of Black Wallstreet shows that if Blacks get together and positively focus on Business the result will be greater for several generations.

Whether he’s getting sensitive in the old skool vibe “The Truth”  Amari establishes himself as a modern-day master of the true form of Hiphop here. Following on from what artists like KRS One, Nas, and many have done.  “They think you are hating when you are speaking the truth”. Lyrics that touch at the core of the world we live in today with many not conscious of themselves. They are busy doing TikTok challenges until someone gets hurt and as Bob Marley said we do all have to emancipate ourselves from mental slavery.

There is a textural expressiveness to songs like “Above the Rim”  you are hit with corruption in a system without trying to be political and follows on from ‘The Truth’ and really a track that deals with actual facts. It’s a look at the world we live in and strategic parlance on making sure people can study and deal with the facts. The lyrics are poignant and hard-hitting certainly like a warrior from the Western Hemisphere.

Amari artfully weaves different instrumental components together in “Head up High,” “Unapologetically Black” and “A Beautiful Soul” and despite the fact that every one of these compositions is an individual beast in its own right, there’s a sense of continuity to the music that makes everything feel progressively tied together, as though we were reading from different passages in an intimate diary of love, lust, loss, and luminosity.

I don’t often say this about records, but Grand Rising… feels almost operatic in its storytelling-centric aesthetic, and I think that its outside-of-the-box-style construction is definitely what makes it the perfect HipHop album to kick off the ensuing year.

I’ve been listening to a lot of really good music this year, but of all the records in this genre, Amari Mar’s latest is definitely in a class of its own. Every time that we think we’ve heard the best of his brilliance in action, like the chest-beating “Live your life” for example, he turns around and finds a way to top himself, like in the climactic ending number “The Gift,” which isn’t something that can be said for the vast majority of artists he’s competing with for the spotlight at the moment. “Beyond the Surface” shows that what you are seeing here is a rapper with his third eye fully open to take in and someone who is certainly blessed by God. Ring the alarm, this is certainly a hit.

Grand Rising sees Amari quietly set about, not by conscious design, building one of the best under-the-radar discographies in the music world today thanks to the consistently high quality of his work and the growth he’s evidenced as we go through the various tracks.

The Chosen One is another classic and despite the emotional weight of the lyrical content, Amari never fails to surround the writing with pointed musical accompaniment never overstepping its mandate and aiming for nothing else but capturing the audience’s imagination and hearts alike.

The Darkness is a note-perfect introduction to his intentions. The song’s imagery is finely tuned and open to the listener’s interpretation, though Amari certainly tells a story in his own unique voice.

The Right Path goes in a different direction with the inclusion of hard-hitting drums and heavy trumpet sounds and harmonies which play along with a lot of bite. Tastefulness and artistry prevail again though – though the songs have a very different sound, the instruments introduced with this second song never come off as overplayed and by the time we reach the last track “Rise n Grind”, you know you have listened to a piece of art.

It’s a guiding principle behind  Grand Rising as a whole. The title song is my favorite moment on the release because it seems to explode the radiant possibilities of the first two songs into a whole new direction that, for newcomers to Amari’s music, will undoubtedly impress.

Amari is an ace at making unselfish, easy-going HipHop records with a soulful, independent-minded lyrical center, and if you’ve never heard his music before now, I would say that this LP is a good way of getting acquainted with his sound. It’s certainly one of the more complete efforts I’ve heard from an underground performer recently, and a strong contender for the best indie HipHop album of the year if his scene fails to match its high caliber of content.

We decided to catch up with Amari Mar for an interview….

What inspired you to get into music?
I was an avid music listener ever since I was a child coming up. I would watch my grandfather play records on the turntable, anyone, from Otis Redding to Sam Cooke to all the great soul singers from that era. Once I started listening to rap and hearing rappers like Rakim, Nas, Biggie, Kool G Rap,LL Cool J,Wu-Tang, A Tribe Called Quest that’s when my world open up and was inspired to start writing rhymes and then eventually started hitting the booth once I was ready to start recording music.

How would you describe your music?
My music is thought-provoking and conscious over dope boom-bap beats and soulful sounds. I always try to drop jewels and incorporate good energy and vibes into my music for the listener to gravitate and listen to.

What would you say is your recording and songwriting style?
I like to listen and vibe to the beat first till I get a good grasp on what to write and talk about. Sometimes I have songs written to a particular beat but then I might have that song or a verse go on on a different beat that goes better with it. When I’m in recording mode, I try to avoid punch-ins as much as possible. The more I memorize the song the better I can execute and play on certain words and phrases without losing my cadence or feeling when I’m in the booth.

Where would you like to see your music career in 5 years’ time?
In the next 5 years, I would like to still keep recording and making music. I would like to be in a position where I can be more behind the scenes and play the background investing in other talent. I also have other interests outside of music.

Where can music fans listen to your music?
People can find my music on my bandcamp page at http://amarimar.bandcamp.com . Also on digital streaming sites such as Itunes, Apple, Spotify, Amazon to name a few. Im in the works of rebuilding my new website where my listeners and supporters can get access to my music directly, merch, and other info on me.

For more information. See links below: