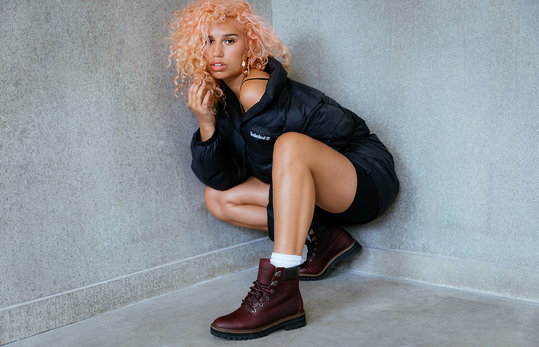 257.9Kviews
Post Views: 258,322
RAYE who is nominated for Best Newcomer at this year’s 16th annual Urban Music Awards has partnered with Timberland to ‘Celebrate the Icons’ and launch new boot, the London Square, with a 90’s inspired music video for Wideboys’ UKG Remix of RAYE’s hit track ‘Decline feat. Mr Eazi’.
The yellow Timberland boot, favoured by workmen since its launch in the 70’s, was brought to cultural prominence in the 90’s by american hip-hop artists like the Wu-Tang Clan, Mobb Deep, Tupac and DMX. The popularity of the boot within the music industry elevated its status into a timeless fashion staple.
Now, Timberland’s new London Square boot celebrates and reimagines the icon. Inspired by this remixing, RAYE’s video features modern twists on 90’s culture and pays homage to legendary music videos, with references including: Missy Elliot, Aaliyah, Lauryn Hill, Beastie Boys, Snoop Dogg & Dr Dre.
Shot in Newham, East London, the video was directed by Daniel Brereton (Bastille, The Vaccines, Tourist) with art direction by Aaron Sillis (Rihanna, FKA twigs and Jungle).

Speaking about the video RAYE said, “Icon is such a powerful word. As an artist, I think that to be truly iconic, your music, your style, your personality – it has to be 100% authentic. For this video, getting to celebrate some of my personal heroes and put my own twist on their iconic 90’s moments has been so much fun”.

The new Timberland London Square women’s boot is available online and in-stores now. The boot is made from premium leather and features a 90’s style sole, alpine lacing details and two-tone laces. Timberland are currently celebrating the 45th anniversary of the iconic yellow boot.